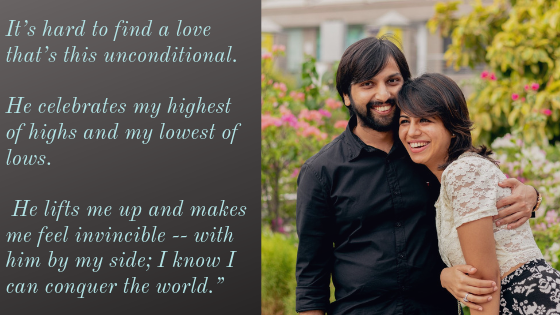 There are going to be ups & downs

Things, situations that will put us on a spot

Every situation, every problem can be solved when you have that one person who’ll stand by you, NO Matter what

with your love beside you, everything feels at ease

problems, hardships will still be there but you’ll be strong enough to face them

Does all this seem too good to be true?

A perfect script for fantasy & not possible in reality?

If yes, then here is a story that will change your answer

A story that will make you believe & crave for love

With You By My Side, I Know I Can Conquer The World [Power Of Love]

“When I was younger, I remember leading Republic Day parades in Delhi. The feeling was indescribable — that’s why I decided that when I grow up, I wanted to be a part of the Indian Army.

So after my 12th, I moved to Mumbai to study law and was going to then prepare for the Indian Defense Forces.

Around that time, I met Shashank. A friend had tried to set us up.

Our first meeting was so awkward, I remember him driving me to an event — he got down to open the car door for me, but ended up slipping and falling himself! It was hilarious, but that night we had such a great time.

We kept meeting after that, and became best friends!

If I told him that I wasn’t feeling well, he’d travel for miles just to get me medicines.

He’d pamper me so much. He started liking me, but I was so focused on my career, that I never paid attention to what I felt for him.

I remember once, we’d both gone shopping. But I left all my bags in an auto… seeing how stressed I was about it, he went and bought all of those things for me again. But at that time he’d told me that he’d actually found the auto!

Soon, both of us moved back to Delhi — he joined his family business and I started preparing for the Defense Forces.

It had been 6 years since we knew each other by now. So one day, he told me that his mother asked if both of us thought of getting married.

At first, I didn’t know how to react, but I looked at him and asked myself if I’d be able to live a life without him — that’s when I knew it was time to commit.

But my only condition was that we’d marry after I cleared my exam.

He was nothing but accommodating. In a short while, I cleared my exam in the first attempt and then started my defense training.

Little did we know what was in store for us. [Test Of Love]

Once during my training, I was riding a bicycle when I slipped and fell down. One of the girls behind me couldn’t brake in time and rode her cycle over my head. I was severely injured — my face was in a complete mess.

I started thinking about the amount of money I’d paid for the training, but at the same time, I didn’t have it in me to continue.

That’s when Shashank became my ray of hope.

He told me that I could do what I wanted and he’d be by my side no matter what.

He helped me make the most difficult decision of my life and never let me feel low. So I decided to stop my training and work full time as a lawyer.

Shashank has been with me through the toughest phase of my life, he’s loved me at a time when I didn’t love him back.

He’s stood by me even when I chose my career over marrying him.

It’s hard to find a love that’s this unconditional. He celebrates my highest of highs and my lowest of lows. He lifts me up and makes me feel invincible — with him by my side; I know I can conquer the world.”

Why Failure Is A Part Of Life & A Step Towards Success

Why College LIfe Is The Golden Life